The University of Maryland women’s basketball team are seeded #1 in their region, and began the 2015 NCAA tournament with a game against New Mexico State University at Xfinity Center in College Park, Maryland. It is unclear why Comcast decided to rename Comcast Center as Xfinity Center; we know who you are, we know you are opposed to Net Neutrality, bills that make sense, reasonable charges, etc., and renaming the building fools nobody.

On the first day, March 21, 2015, two games were played at Xfinity Center. The first featured Princeton University against the University of Wisconsin-Green Bay. President Obama’s niece is a forward for Princeton, and he attended the game, along with Malia Obama, his eldest daughter, Marian Robinson, his mother-in-law, Craig Robertson, his brother-in-law (and father of Princeton forward Leslie Robinson) and various other friends and relatives.

Outside Xfinity Center we found this fan enjoying the pleasant spring weather:

Inside Xfinity Center, security was unusually tight. The men operating the security scanners were from TSA (Transportation Security Administration), but the scanners themselves came in boxes stenciled USSS (United States Secret Service). Note both the Maryland scarf and Maryland socks of the woman on the left. I bet she also has a Maryland jacket worn over a Maryland shirt, too.

During the game, I sat directly across from the President of the United States, as clearly shown in this photo.

If that image isn’t clear enough, try this one. And yes, I know: mobile phone cameras are not designed for this:

At one point, the Princeton fans chanted “Four more years! Four more years!” The President and his family (and most of the rest of the crowd) found this funny; the Green Bay fans, less so.

During the second game, the University of Maryland took on New Mexico State University. As with most matches between #1 seeds and #16 seeds, the outcome was not in doubt, and Maryland won 75-57. Maryland will play Princeton on Monday, March 23. 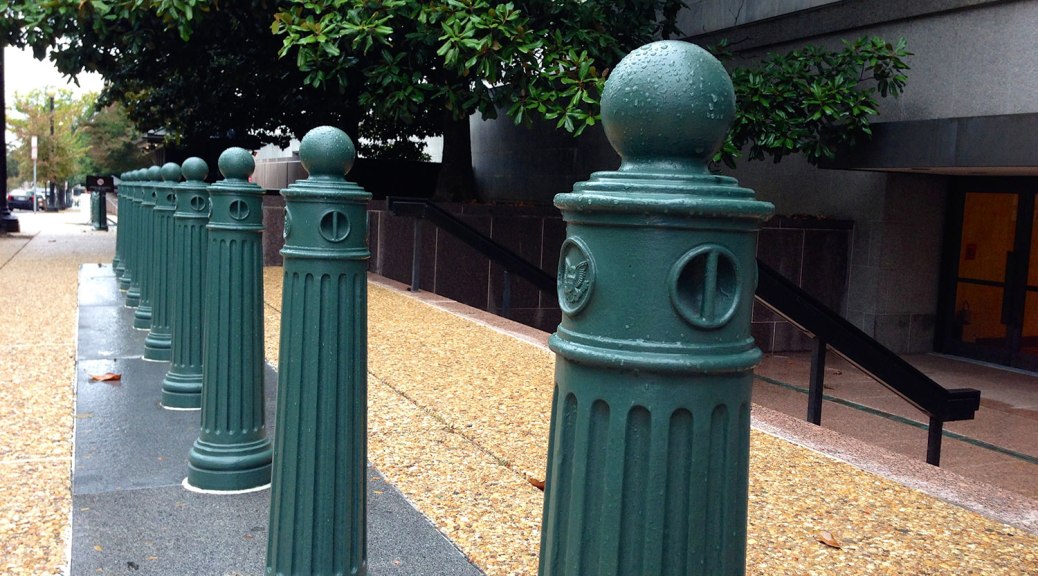 Traveling to the nation’s capital from distant Silver Spring, Maryland, was a journey through a single timezone and a distance measured in subway stops. Along the way there were many wonders, such as this Transformer attempting to sneak toward the capital disguised as, ah, a Transformer?

It isn’t clear if this is a good Transformer or one of those bad ones that appear to be pawns of developers, laying waste to urban areas in order to promote redevelopment.

Once in the District of Columbia, there were many unusual sights, such as this orchard of bollards, part of the vast bollard forest that is expanding to cover every spare inch of Washington, DC:

Bollards were developed to tie up ships to shore facilities, but one thing Washington does not have is an accompanying fleet of ships tied to the forest of bollards. As the bollard population is constantly growing, we can only conclude this is proof positive that global climate change is real, the oceans are rising, and the government is preparing for a massive rescue fleet.

Finally, just two blocks from the Capitol (with an “o”) in the capital (with an “a”) you can find this luxurious vehicle, showing what separates the movers and shakers in government from the rest of the masses. Note the unique customizations to this relatively late model car:

People in the capital aren’t like you or I; they’ve got custom rides!

Located at the edge of Fort Meade, Maryland, in an old, nondescript motel, is the National Cryptologic Museum. Admission is free, and with that admission you can explore how the worlds of communications, mathematics, and security intersect in cryptology.

Photos from the National Cryptologic Museum.

Hebern Electric Code machine, built around 1918, was one of the first U.S. developed modern coding devices, with one rotor and nicely detailed brass segments. Like the Apple, it was Made in California, USA.

The M-9 Bombe Checking Machine was a US device built in large numbers to perform brute force attacks on German codes during World War II. Several machines were fed the same code to find the proper rotor settings, and once found, the code could be translated.

This Enigma machine and many variants was used by German forces throughout World War II. This particular device can be used by visitors to create their own secret messages.

The German SZ42 Schlüsselzusatz, or cipher attachment, was developed by the Germans in 1942 for use by the German Army. The British nicknamed it “Tunny,” after a type of tuna. This seemingly random name was due to the requirement to call all German encrypted traffic “fish,” as a security measure.

This Connection Machine CM-5 was built by the Thinking Machines Corp. It was used by NSA from 1991 to 1997, and was called “Frostburg,” after a college town in western Maryland. The many blinking lights are decorative.

This Soviet made IMZ-Ural motorcycle is a Soviet copy of a German BMW R-71 motorcycle from 1941. It was captured from the North Vietnamese Army by the U.S. during the Vietnam War, and has not a thing to do with cryptanalysis.

Outside the National Cryptologic Museum gift store is this replica of the Rosetta Stone. Created around 196 BC, it displays a decree from an Egyptian king, written in Egyptian hieroglyphs, Demotic script and ancient Greek. Discovered by a French soldier during France’s invasion of Egypt in 1799, it provided the key to unlocking Egyptian hieroglyphs, much as modern code breakers look for keys in breaking coded texts. The real Rosetta Stone is on display at the British Museum in London.

Photos of the National Aquarium in Baltimore.

The legislative branch is undergoing some much-needed patching. To the right you can see the very tip-top of the Jefferson Building, part of the Library of Congress, behind the Capitol. Legislatives rarely go there.